Gene Tognacci will always have a special place in my heart because he was my first year-long client.

As a veteran voice over artist (and owner of the company eLearning Voices), Gene was much more comfortable being heard than being seen – so he wanted to do all of his sessions via Skype audio from his home in Texas. No matter how sweetly I cajoled, he would not let me see him on screen… so it wasn’t until long after our Leap Year was completed that I finally got to see the face that belonged to this warm and wonderful man.

Ultimately, though, his reticence was a gift to me – through it, I discovered that the abilities I brought to this type of long-term, intimate coaching would have the same amount of positive impact whether I could see my client or not.

When he began his year, Gene said he wanted to fix one main “outer” issue: his overwhelm regarding the details of his biz… and one main “inner” issue: his diminishing desire to do voice over work. He was anticipating that we’d focus on streamlining his operations and increasing his marketing efforts (to get new clients that would pique his interest).

But do you know what I thought we needed to focus on?

Here was a responsible, talented man who had built a productive career and who, to my mind, should be enjoying the fruits of his labor and experimenting with some bolder moves. Instead, Gene was working in isolation in an office environment that stressed him out and not giving himself permission to design a life that he truly enjoyed. By not allowing himself the pleasure of working and living as he knew he wanted to, he was becoming creatively stuck.

Those additions are what enabled more money to flow in, more dream projects to get done, and more mental rejuvenation to occur.

In tandem with making this huge perspective shift, we accomplished two major infrastructure projects together: we organized his home office (via a laptop and Skype – but he still refused to appear on camera!) and we created a new website and bio that better represented his distinguished body of work:

When you have a significant story to tell, an important message to deliver, or a complex lesson to teach, I enable your audience to absorb it with ease.

I’m an explainer. A teller of truths and a deliverer of “a-ha” moments. And I absolutely love what I do.

Once upon a time, I would get in trouble for telling tales… now I’m an ADDY Award-winning voice over artist with a first class recording studio and an expert support staff – we deliver top-tier audio to clients world-wide and we specialize in same-day turnaround of large projects (up to 4 hours of finished narration per day.)

My professional passion for sharing answers is directly tied to my personal history as a life-long asker of questions. (The kid taking apart your clock radio just to see what’s inside? Yeah, that was me.)

So, if your audience has questions… I may be your answer.

Play the video below to listen to my interview with Gene about the unexpected results of our year together: 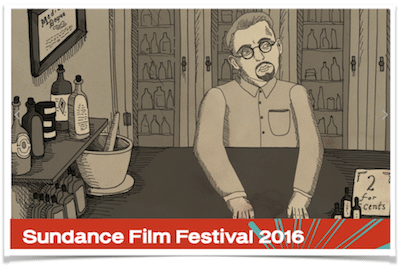 What’s Gene up to these days (four years post-Leap)?

The feature documentary NUTS! – which he narrated (and is the Associate Producer on) – is one of the sixteen docs that were chosen to have their World Premiere in competition at Sundance this month. Woo hoo!!!

Turns out, in the 1980’s, Gene, himself, was considering doing a documentary on fellow Texan John Brinkley (the subject of NUTS!). As Gene tells it:

Some friends and I would get together and research Brinkley, interviewing folks who knew and worked for him. I gathered notes, recordings, artifacts – I even have one of his x-ray machines in my garage! But I could never get started making the doc.Several years ago through a friend, I heard that director Penny Lane was raising funds for a her own documentary on Brinkley, so I made a contribution, not thinking it was going to lead to much else other than a “Thanks” credit.

But then, in 2012, you and I had a conversation and I wrote to Penny saying:

“I’m working with a business development coach on building the documentary narration part of my business (feature documentary and History Channel type areas). I’ve done a 3-part, local PBS series and some nice pieces for NASA, but not enough to attract more of that type of work. The coach suggested that I connect with some documentary filmmakers and selectively offer my VO services pro bono to build up my resume in that specific area. Do you have any organizations that you would recommend I join that would be a good resource for finding producers?”

Her response was to request a demo and ultimately bring me in as the Narrator! Audio was recorded in 2012 and production continued slowly. In 2015, Penny was raising post-production funds and asked me to come in as Associate Producer, which I did. And here we are… I’ve got my name and voice attached to a documentary that is so far ahead of what I could have done. A big check mark on a 30-year bucket list item.

My willingness to participate was not only inspired but empowered by our work together. I truly believe that if you and I hadn’t been working together when this opportunity came along, I’d still be fighting a lifelong incompletion. The material in Feeding Your Focus was also a huge help in this area and gave me the courage to explore the power of collaboration.

A big hug of appreciation to Mr. Tognacci – not only for putting his trust in me but also for allowing me to share his story with you. Thanks, Gene!

(The photo at top is of the International Space Station. One of Mr. Tognacci’s favorite projects was narrating the NASA documentary Destination Station.)