This is letter three.

This letter is about lists. And perspective shifts and how I got my dream car.

My dream car was a Prius…

Great qualities, all of them, yet all secondary to why I wanted this particular car. Come on people, when someone says “dream car” they are talking about their ego, and I am no exception.

My ego wanted a Prius because I considered that particular car an inscrutable status symbol. Am I, like Larry David and Cameron Diaz, wildly successful enough to drive any car I want but I’m choosing a Prius to help save the planet? Maybe. And, for my ego, that “maybe” was the brass ring.

I live in L.A., so I totally understand there are plenty of people driving Mercedes SUVs who can barely afford the payments because they want folks to think they have more money than they actually do. My desire, however, wasn’t to fake a level of wealth I didn’t have… my desire was to have folks not know – to eliminate my car as a clue to the level of my status and, by doing so, dodge any judgements.

That slightly embarrassing glimpse into my psyche is actually beside the point. To get to my point, though, I need you to know that for many years I was driving around the city in my hail-and-hearty 10-year-old Toyota Camry with my ego pining for a Prius. BUT, I couldn’t see how I was going to get a Prius because a) I didn’t want to buy one because I didn’t want to have to replace its $5,000 battery at some point, and b) I didn’t want to lease because buying a car had always been presented to me as the more fiscally prudent way to go.

That day was the peak of a mighty winter storm in L.A. – so mighty you can even Google it. It has it’s own Wikipedia page! (Fun fact: a little tornado touched down in L.A. that day, the first one to strike the city in a decade.) It wasn’t just “raining” – oh, no, no – all day long the heavens were pummeling the ground with angry fists of water.

Because I work from home, my husband and I share one car. When I need to go somewhere, I drive him to work (one town over, in Burbank) and pick him up. On December 12, 2014, I had an early-morning doctors appointment in Pasadena (for something that was pretty important so I didn’t want to postpone it), so we drove to Burbank in a downpour and then I drove to Pasadena in an even heavier downpour.

But I made it! And I got a parking spot right in front of the building! And the thing the doctor was looking at turned out to be nothing! THIS WAS BECOMING A WONDERFUL DAY!

Until, on my way home, I crossed an intersection and our Camry hydroplaned into the curb-side lane that, due to the grading of the intersection, had turned into a pond and suddenly my car became a leaky boat that was not-so-slowly filling with water.

(Hi, my name is Kristine Oller and I lost my car in a flood. In Los Angeles. You should definitely choose me as your life coach.)

The equilibrium of the outside water and inside water was achieved juuuuust as it reached the top of my seat cushion, upon which I was crouched in a squat for quite. some. time. I was never in any mortal danger because my dad had given me one of those “break the car window” hammer thingys a few Christmases ago so I knew I could, if necessary, exit the car and wade to “shore” (which was looking like a route I might seriously have to take as I watched my hero of a tow guy balance on my hood while making his third attempt to attach my car to his truck).

Eventually, I was dropped off at my doorstep with a few soggy belongings, a session with a coaching client in a few hours, and the looming pleasure of having to, ya know… casually mention to my hubbie that we no longer had a car.

Before going on with my day, I made three decisions to help steady myself:

2)
I made a decision.
I decided that, beyond my husband and my sister, I was not going to repeat this story to anyone. I wasn’t ashamed, I wasn’t traumatized, but I suspected that the emotional and energetic “charge” of the event would dissipate much faster if I didn’t keep retelling the story and answering questions about it. I wanted to experiment and see what it would be like to let a Dramatic And Juicy Story like this one pass quietly through my life. I think it was a few years before I ever brought it up to anyone. Not sharing the story allowed me to file it in my memory exactly as I wanted to: as a surprising-yet-lucky day.

3)
I made a plan.
While this calamity was not my fault, it did happen on my watch. Thus, when I presented the car’s co-owner with the news, I also wanted to present him with a plan. We needed a car pronto. We didn’t have a lot of time to search for a good used car or decide on the next ten-year-car that we wanted to buy. We also didn’t have a lot of cash available for a down payment. I felt like, at this moment, our priority was simply to buy ourselves some time – which is why my sister suggested we lease.

So that, ladies and gentlemen, was how I “manifested” – LOL – my dream car. (Fun fact: due to a posted price error on the dealer’s website that wasn’t discovered until well into my negotiations, I got us the deal of the century – a two-year lease at a mistake-of-a-price!)

And it’s not about adopting a quick, forced, or skewed “everything’s fine” attitude. It’s about choosing which pieces of proof you are going to keep your attention focused on, and, when your attention strays (which it will), choosing to keep bringing your attention back to that proof again and again until your entire perspective on the matter has genuinely shifted.

Also, staying focused on the perspective that makes you feel better and more empowered is a lot easier to do when you are not expending extra energy telling your story to ev-er-ree-one and fielding a jumble of questions, concerns, and Monday morning quarterbacking that keeps you off-kilter.

Next week, I will reveal my favorite line from Hamilton. Place your bets.

Wishing you safe, smooth sailing into the new year,
Kristine 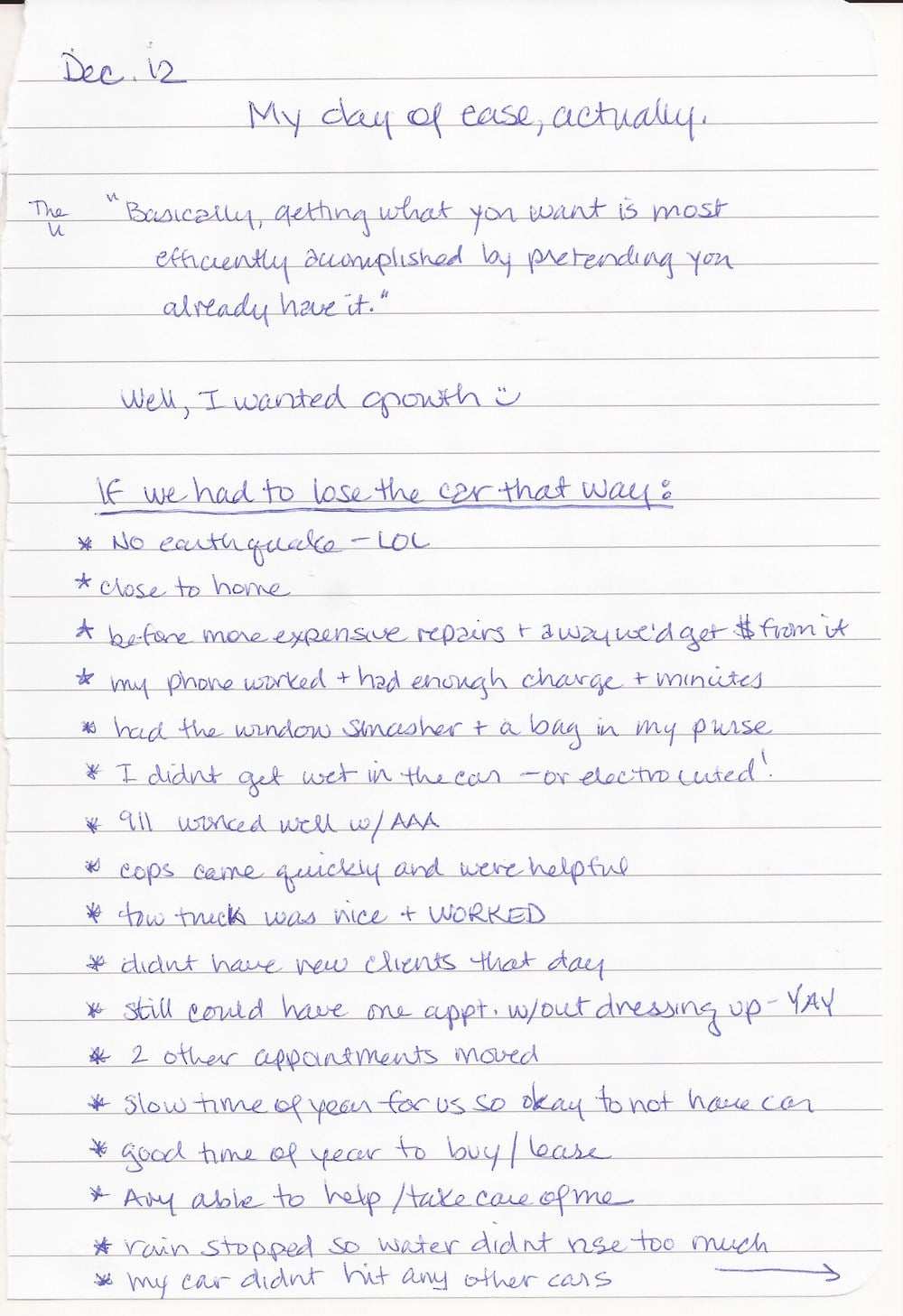